This pickle makes me laugh…..

It makes me happy…

So it is pickle face….Mr.Bill’s cousin…..

I had wrote this paper a long time ago…

It was for homework for college….

This is my throw back…

Sometimes, I wonder why teenagers can act stupid. What I mean is that teenagers sometimes don’t seem to think. I have two of them, a 15 year old (daughter) and a 14 year old (son). What I don’t get is their behavior, if you teach them right from wrong; they still end up in some kind of trouble. My daughter got in a fight last week, when the girl grabbed her by the throat. My daughter did defend herself and we are still waiting for the cops to take care of this matter.  It is non-stop drama, from cell phones to Facebook.

When you try to confront them about it, they give a severe attitude. I raised my kids with manners; and they still end up being disrespectful. I see this behavior from other parents, and they start wondering why. My daughters’ ex-best friend’s mother is totally clueless with her children’s behavior, and denies anything is wrong.  HELLO, ARE YOU BLIND! WAKE UP BEFORE YOUR CHILD ENDS UP IN JAIL!  Yes, I am strict, when it comes to curfews and where they are going. At least I know where they are.

Why teens do keeps their rooms a mess? Are they afraid of being clean, or getting lost? Sometimes I think I need a map just to find my kids. Like the ones, they have at the mall, you are here X.  Like the Houdini trick at dinner time, when it’s time to clean up. I like the last minute laundry at 11:00 p.m. on Sunday, right before school the next day. Yes, I remember when I was their age. Then I ask my Mom, “Was I this way?”  Of course, she said “YES!” Just my luck, two mini-ME’s.

Sometimes, my husband is my third teenager.  He acts just as bad as my kids.” Why me Why me”, as I bang my head against my pillow. Then I remember that I have chosen this life.  My 4 year old (daughter) doesn’t act up as bad, yet.  Today, I don’t know who threw the worst tantrum, my husband or my 4 year old.

Here is another example, my next door neighbor and her teens stayed with us for short a period of time, while their electric was off. The one of her teen’s behavior was unreal. She would follow her mother everywhere and her tantrums where worse than my youngest. I wished that Super nanny would have come out of retirement.  While her brother was respectful, kind, and thoughtful to us. Again, what is wrong with this picture? Why didn’t the mother do anything about it?  Then you wonder how she was raised as a teenager. Now, I wonder why I am getting gray hair.

My teenagers’ wonder why, I get moody. Well, Hello, You kids can drive me nuts!  They just don’t get it. They don’t think that I was a teenager too .They doesn’t understand their behavior makes an impact on everyone. My daughter told me about her best friend, and her boyfriend.  My daughters friend was hit by her boyfriend in school .When He was confronted by the principle, he said that he didn’t do anything. Little did the boy know, there are cameras in the hallways? He got suspended for 4 weeks, and the boys’  mother  is in total denial  of the whole thing. The woman has 7 children and can’t handle the two oldest, which walk around my town at all hours of the night. Then she trash talks everyone else about their children. Get real lady !  This has become a typical behavior in my neighbor hood . When is it going to end ? When it’s too late, and then try to blame on everyone else except themselves . Parents need to be parents instead of being  friends to their children . Our world is doomed as we know it  , by  this behavior.  This why , I am glad to explain this behavior to someone  .

I am in a better mood…

I was able to get my van fixed….

My in-laws called ….We told them that we didn’t need their help…

I happened to see a face in the pickle jar….

I figured the pickle is saying….Help Me !!!

After , I had my breakdown….I got mad…

They used it for themselves…

I love my in-laws…but in this case …

They need to give my husband his money back…

I was able to get my van back…

I am happy about that….

Until ..my only transportation brokedown….

It was the last straw for me….

My stress level was high enough…

I just broke down……

Why am I getting the bad luck?

Am I getting punished for something I did or said?

My belief in the higher good is thin….. 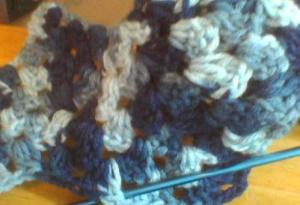 I have been working on the ripple ….

It is getting better…

It is a slow process….

It is getting there…

I had to take a stitch out ,..because I didn’t count the stitch I was working on

I finally organized my fabrics…..

I put them in a empty orange crate….

I can see what fabric I have and what I need….

Orange crates are good as shelf as well….

Plus, as a dresser organizer

gobagese1
Create a free website or blog at WordPress.com.